It’s was 100 years in the making, however women’s footy is well and truly here, a feat of equality and inspiration, one Monadelphous is proud to stand in support of, with the Heavy Lift team driving the sponsorship of the WA State 15s Schoolgirls AFL team.

As a leading sponsor of the Under 15s team, which focusses on encouraging and developing young women’s AFL skills in a state team environment, Heavy Lift supplied the girls with their first set of brand-new training jumpers which were specially designed for them in-house by the Monadelphous marketing and communications team. 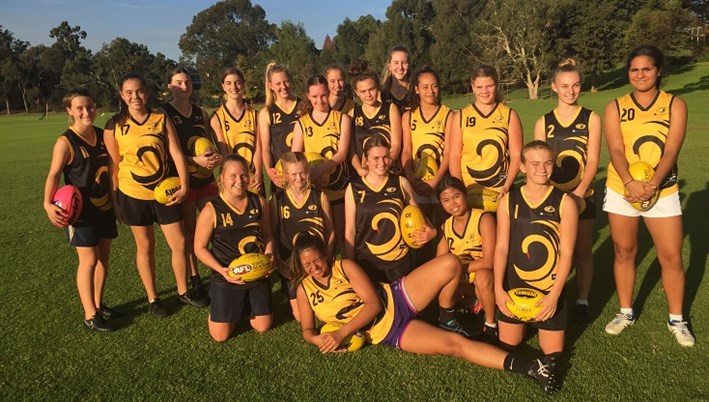 The Under 15’d team in their new training jumpers

“We are thrilled to have Monadelphous on board sponsoring our State 15s. Not only do the girls look professional and united on the training track, our core values of wellbeing, integrity and teamwork line up with Monadelphous’ values. It is a great partnership that will benefit both parties in a meaningful and exciting way, said Oliver Beath, Head Coach of the WA State 15s Schoolgirls AFL team.

​The core squad of 24 girls compete in a range of scratch matches and three months of training leading into the main event – the national carnival which will take place this month between 21-28 July in Adelaide. The team will play five matches in seven days, with winners crowned the coveted title of National State 15s Schoolgirls Champions.

To be selected for the state team, players must meet relevant eligibility criteria and participate in various training sessions to be selected for the team. A team of 24 is selected as the travelling team with an additional 30 entered into the development squad to continue to grow their playing skills.

Did you know? AFL Women’s competition: