The Barrhill Chertsey Irrigation Scheme (BCIS) was developed to supply an area that was previously serviced only by groundwater sources at the top end of the Canterbury Plains region of New Zealand.

The BCIS takes water from the Rakaia River to supply 19,000 hectares of prime agricultural land. The project involved engaging with landowners, developing a concept design and cost. The works included the construction of header ponds from the main supply channels, and piping into new areas to deliver water under pressure.

Following the success of stage one, Monadelphous was awarded the stage two contract.

Development, design, procurement, installation, construction, testing and commissioning of both stage one and two.

Both stages combined included over 16 pumping stations and 89 property off-takes with isolation, flow and pressure management, completed with full commissioning, testing and handover of the system. 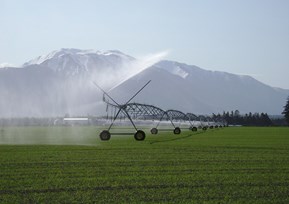