The Caval Ridge Mine is a located in the northern section of the Bowen Basin, southeast of Moranbah. The mine has been identified as a quality hard coking coal resource to support BHP Billiton Mitsubishi Alliance (BMA) growth options.

The project involves a new coal mine and a coal handling and preparation plant (CHPP). The new Caval Ridge Mine will have the capacity to produce 5.5 mtpa and the CHPP will also process an additional 2.5mtpa of product coal from the expansion of the neighbouring Peak Downs Mine, which will be transported via conveyor.

The scope of works for the northern and central circuits into and out of the Coal Preparation Plant, included: 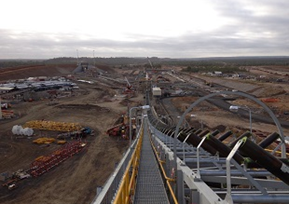